In conversation with Standard Deviation, the Danish Research and Design Lab SPACE10 explores visions for a regenerative future, and what it means to give back much more than we take.

We are approaching the biggest ecological collapse in 65 million years. The urgency of this moment demands a different kind of thinking — one that puts life at the centre of every decision. We should take our role in this mess seriously. If the human species have single-handedly changed our planet’s ecosystem for the worse, then we are more than capable to enact repair on a planetary scale. This time, by design.

What is regenerative design?

Regenerative design seeks to not merely do less harm when designing, but rather to put design to work as a positive force that restores, renews or revitalises. A concept that’s inherent in nature, regeneration should be the approach for how we interact with the planet. It is a way of thinking that’s focused on giving back much more than we take.

For one, we can listen more closely to nature. ‘Nature, by default, is regenerative,’ explains Mawuena Tendar from Standard Deviation. For millions of years, our global ecosystem renewed itself through processes of life and decay, decomposition, and fertilisation. Thanks to the work of many different species, processes such as pollination, water and air filtration, and carbon sequestration all contributed to the biodiversity, health, and resilience of ecosystems. These ecosystem services laid the foundation for regeneration. It’s not nature — it’s us. ‘It’s the way we, in industrialised societies, engage with our ecosystem that’s degenerative,’ says Tendar. 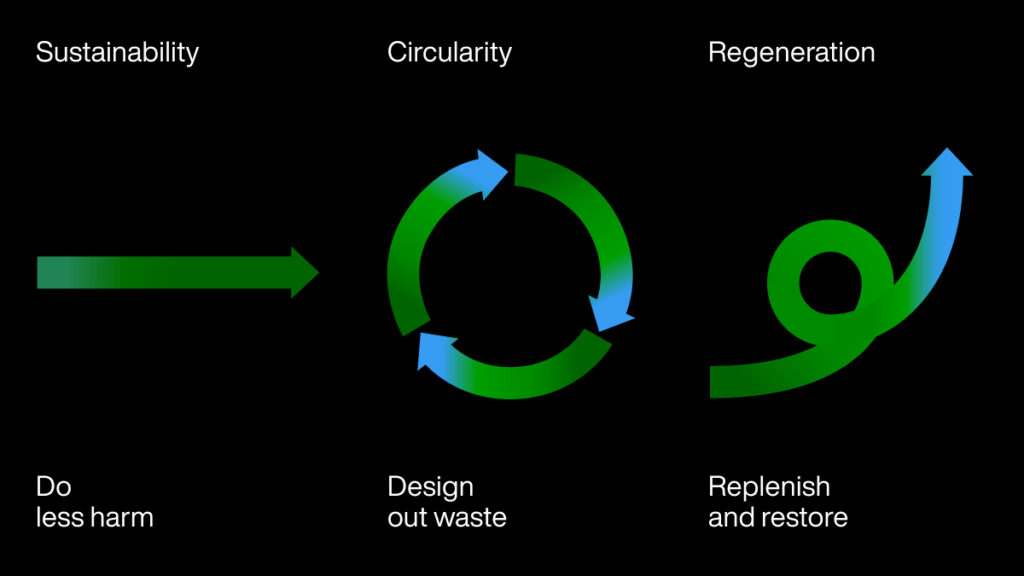 It may sound hard, but some pioneering companies have shown that it’s possible. In 2015, carpet manufacturer Interface was on target to hit zero-impact status by 2020. However, the company decided that being sustainable wasn’t enough. They wanted to be more generous — they wanted to contribute to the ecosystem around them. The company looked at the local habitat of one of their factories, a flat river plain ecosystems on the outskirts of Sydney, Australia, and analysed how this habitat would naturally function, and what ecological services it would provide. How would it clean water? How would it clean the air? And how much carbon would it store?

The answers became the benchmarks not just for what the factory would do, but what it would give to the surrounding ecosystem while supporting business too. With design changes, like installing a rainwater collecting system and treating it to mimic the natural water treatment behaviour of the area, an otherwise nondescript industrial building was transformed into a place that restored nature.

Towards a regenerative future

‘As humans, we have a role in accelerating natural regeneration,’ explains Lara Pagnier of Standard Deviation. In fact, regeneration should be at the forefront of all human and organisational systems. Rodale Institute calculates that moving towards regenerative practices, we would be able to sequester more than 100% of current human emissions of CO2 — by using it as a nutrient of life. We can contribute to the health of the planet and move towards a regenerative relationship between us, as a species, and the ecosystems we depend on.

Read the full article from space10.com